The final book of the The Mark of the Lion series. Might have been my favorite of the three. SO good. 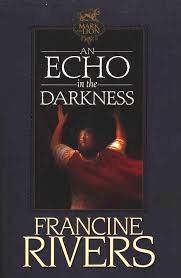 Basically, these books are changing my life-how I think, challenging my faith, teaching me to pray and trust in God. Good stuff.

As Christian fiction, I wasn’t expecting much. No offense to Christian fiction, but it’s just usually too cheesy to be my cup of tea. But this one surprised me! It is the first in a 3-book series (The Mark of the Lion series). The story takes place in about 40 AD, in Rome, after the Romans destroy Jerusalem. The main character Hadassah is taken from her home in Jerusalem in the seige and forced into slavery for a powerful Roman family. There’s also another story going on of another slave-this one is Atretes and he is a captive from Germania, forced to fight and kill as a gladiator in the arena. I’m onto the second book already!